As many of you know, my son Kyle was killed January 31st by an impaired driver just a few minutes after we departed for home from a glorious 8 day father-son road trip to Key West and the Florida Keys. I was headed to Columbus and he was going back home to Austin, Texas, only 15 minutes or so behind me.

Six or more people rushed to Kyle’s aid after the collision (estimated to be in excess of 120mph) and stayed until the ambulance left. According to the Baldwin County District Attorney, it is very unusual to have that many people stop, make heroic efforts and stay till the end. I have thanked six on the phone and become FaceBook friends with five of them. Am looking forward to meeting Steve Hogue and Toni Jumonville in person some day soon. I got to meet two of these angels on a recent trip to Baldwin county – Nathan Smith, a talented actor, stunt-double, and man of many talents, and Harry Sudduth and his fiancé Debbie. When Harry got there everyone was shouting “we can’t get him out.” Harry crawled into the burning vehicle and cut Kyle free, just in time.

I talked with Harry and Debbie for over an hour and it was wonderful! When we got up from the table there were hugs all around. Harry grabbed my left hand, reached into his pocket and said “My daddy always said never be without a knife, and I want you to have this” and placed the knife in my hand. It was an overwhelming moment.

Kyle, an intrepid turtle rescuer, wildlife EMT, and roadway samurai was noted for doing emergency U-Turns to assist people he didn’t know. I like to think that Kyle’s energy summoned these angels and heroes. I am truly blessed to know these folks. 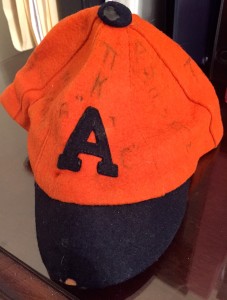 One wintry day two years ago my cell phone rang. Here is a synopsis of the conversation:

Man on the other end: “You don’t know me from Adam, but I stole your Rat Hat (freshman beanie) at Auburn in the Fall of 1961.”

Him: ‘Bin bothering me.

Me: I can imagine.

Me: You don’t have to do that.

So, a few weeks later on a cold and rainy saturday morning, he drove down from Dunwoody, Georgia to make amends.

While he was on his way, I jumped into the shower, and this “pome” just come up upon me!

THE PECULIAR CASE OF THE PURLOINED BEANIE

This is the story of a hat gone astray,

And perpetrated by me, one Alton Conway.

I was quite new on campus, and having much fun.

Then freshmen were required, to recite Auburn’s creed,

And to purchase a “rat” hat – another firm need.

As a freshman at Auburn, I was full of vigor and vim,

That I shouldn’t spend, my own personal cash,

To buy such a hat, when I could make a mad dash.

And snatch one right off, of some poor guy’s head,

And not have to spend, my own money instead.

Now who could ever be such a rat,

As to reach out and filch another guy’s hat?

I was quite proud of myself, and my amazing stealth,

But the hat was soon forgotten, and placed on a shelf.

It languished for years, in a dark and dim loft

Though quite proud of myself, at the time of the stealing,

And I wondered for years, about the original owner,

And how I might atone, for this juvenile boner.

And found the poor man, in Columbus, G. A.

But in spite of the trauma, of losing his hat,

He had become successful, and was sitting quite pat.

The reunion between the hat, and an old man’s head,

T’was a bitter sweet story, which for years may be read.

And they celebrated the occasion, with a fine bottle of scotch!

He arrived and handed over the item of interest (only 53 or so years late), and we had a most wonderful visit.

A week or so ago, I got another call from him, letting me know he was going to meet with some friends of his and related the story.

Hope you enjoy his email:

Steve,
Having lunch with a couple of old Auburn buddies tomorrow and am in hopes that they will enjoy “the rest of the story”. Of all the guys from whom I could have pilfered a rat hat you had to be the magic one. It is times like this that one feels halfway like a Presbyterian. Wanting to believe for fifty years that I abused some football lineman out of his hat turns out to be comical. It is hard to imagine the dull and uninspiring response had I returned the hat to one of those big but slow sports who might have offered only to a thanks or a belated butt whippin. As fate has it I get this multi talented cool dude that writes a poem about the fateful event giving it an aura of posterical proportions. You made it one of those rare times in life when our mind is splashed with such an indelible event that it will carry through time and the fog of old age.

Steve, thanks for being Steve. It sure makes things interesting.

Attached is the latest chapter. My own hat that is conscience free.
Again, thanks a bunch,
AC 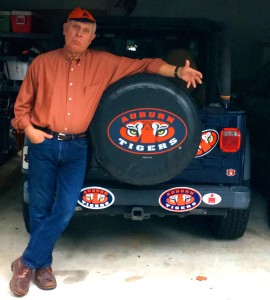 And so ends a very strange tale of mystery, intrigue, devious behavior and redemption.

Regarding the name of my blog “Chattin’ the Hooch” – A friend remarked that he never much cared for the term “hooch.” I can see his point, as it sometimes has negative connotations such as hootch (a name for whiskey, especially those hand-made batches illegally concocted), hooch (Viet Nam slang for a make-shift hut), hooch (the liquid that rises to the top when making sourdough starter) and even “hoochy coochy (a more seamy reference to carnival tents and scantily clad ladies). But in these parts, the Hooch is an affectionate moniker for our beloved river – a river that seems we are just now beginning to appreciate.

Recently I created, with Richard Bishop’s permission (Uptown Columbus), an annual entourage of silliness on Broad Street to be held each spring at Market Days. I named it “Strut the Hooch.” So with that “hooch” floating about in my geriatric brain I guess it was just a natural progression to “Chattin’ the Hooch” for the name of the blog.

So, even though we call our river the “Hooch,” there is a storied history to be learned and admired. Chattahoochee is said to come from the Muscogee (Muskogee) Indian words for painted rock (chato for rock and huchi for marked) and is thought to refer to the beautiful granite outcroppings seen at various points on the river. My local historian friend Fred Fussell adds that over 10 years ago CSU held a conference and invited representatives of many tribes to comment on Indian names that were still in use locally. The Choctaw speaker remarked that in their language “chata” was red, and hoochee or hatchee implied a running stream of water. So in Choctaw it meant red stream or red river.

Most of us know that the Chattahoochee River starts somewhere in North Georgia. To be specific, it springs from a spring on Coon Den Ridge in the Blue Ridge Mountains and the upper course flows gently through the Chattahoochee National Forest. The Chattahoochee has been inhabited since at least 1,000 BC and has been a vital resource. The river also served as a political boundary between the Cherokee nation to the west and the Creek to the east.

Since the 1800s many improvements were made in terms of navigation and the river was very important as a major means of transportation, for passengers and well as trade (mostly cotton). Columbus lies on the fault line separating the Piedmont from the Coastal Plains and is the northern-most navigable point on the river. The many falls in the area are known as the “Coweta Falls” and proved to be ideal spots for dams to power the mills. Columbus became the second largest textile producer in the nation at one time due to the waterpower available and was often called the “Lowell (Massachusetts) of the South.” Sadly, all the mills are gone now but this has allowed for a new era – returning the our portion of the Chattahoochee to its natural state and a source of pride and recreation for all.

When I first came to Columbus in 1971 you could not even get to the river for all the kudzu, barbed wire, trash, oil-soaked soil, and burned out cars. Now the shoal lilies and the shoal bass are returning and there is a plethora of birds to watch – great blue herons, kingfishers, cormorants and anhingas, golden eagles and bald eagles. There is even a heron rookery in the trees north of Total System. One balmy day I counted 42 great blue herons there.

Sitting on the rocks near the roar of the rapids by the Eagle-Phenix Mill buildings is very therapeutic – nature’s Xanax you could say. So slow down, get down to the River Walk near the River Club and take some time to experience this incredible gift we have right in our backyard. 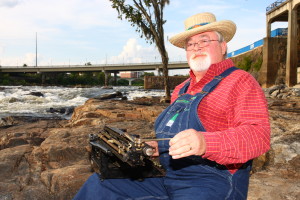 Hi out there. And welcome to my blog – Chattin’ the Hooch. Since I am so very new to this, you may in fact, be my first “blog-ee.” If so, welcome to the Monkey House!

Although I am new to blogging, I am not new to “blathering,” and I figure they are about the same thing. So, at odd moments, and when you least expect it, I will publish a new post on this blog. It will be delivered via Columbus and the Valley’s web page, as well as on Facebook and Twitter.

There will be no central focus or theme but rather an eclectic assortment of posts on travel, food, nostalgia, historical anecdotes, interesting and charming facts and stories about our village, my observations of humanity, music and art, community happenings, and many other arcane tidbits of life. It will be something like the ramblings of a retired mind. I am old and crusty enough (72), have traveled the world, been kicked out of more than a few establishments, met and conversed with royalty and street people, sailed the Seven Seas in the Navy, survived many a blow, love music and play drums and tuba, and generally have had enough life experience that maybe you’ll connect with some of my blathering. I was extremely shy in high school, although my friends will probably tell you that I have grossly “over-compensated.” Hopefully my enthusiasm will not come across as smarty-pants.

I have been told that: I may post as often or as seldom as I like; write about most any subject; will generally not have a censor (except, of course, for editor Venable and his scary red magic marker); that I can shamelessly brag about children, grandchildren, the children’s books I write (Kudzu King Productions) my poetry-for-hire business (The Pome Gnome), feats of daring-do; and the conjuring up of magical tales.

That is all for now. Please check in every now and again to see what strange and wonderful ditties I may have posted. If some of it appeals to you, tell your friends. If it not, well… you could go into the backyard and yell at your neighbor or something.

I will welcome your suggestions on topics, although my wife says I have enough Blarney to last me for another twenty years. So come along for the ride. Who knows, at some point in the future, you may be my millionth visiting “Blog-ee” and win a sausage biscuit or something. 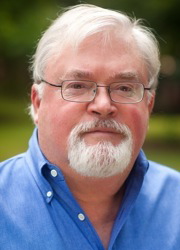