Papa woke us up very early and took us to church. He plays in the orchestra and he said if we were very quiet, he’d let us stand on his music stand during church. We (Flat Frannie and Collapsible Clara) are inseparable. In fact, we are cut from the same cloth (or paper).

It was very exciting and th 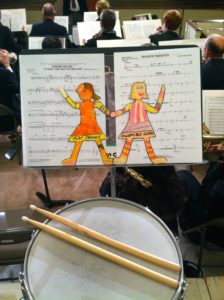 ere were all kinds of instruments. We saw a piccodillo, some flutophones, some clarinetophones (like Raisinettes, but they sound better), a Hoboe and a Bass Hassoon, crumpets, dumbbones, Boratones, some French Fried Horns and a big giant Scooba!

Papa plays in the concussion section where they have some huge Kopper Kettles, an Ex-Wilophone, Cybowls and a set of Chrimes. One lady played the “pringle.” It has three sides and made a pretty pinging sound you could hear over the whole orchestra.

But our favorite was the sneer drum because that’s what Papa plays. He can play very, very soft, or VERY, VERY LOUD. He played so many notes we couldn’t count them. We asked him what the notes were called. He said it was kind of technical but there were some Flams, Ruffs, Easies, Dongadiddles and a special “rudiment” he calls a “Papa-ma-cue.” 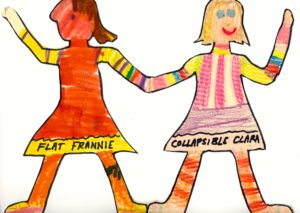 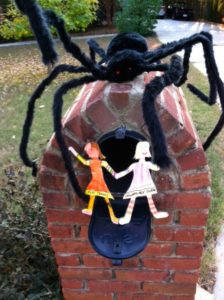 I kind of knew in the first grade that I wasn’t quite like the other kids. Sure, I was interested, energetic and eager to please Miss Hockett, but I always seemed to be in a fog. The teacher was “out there somewhere,” but she sounded like the adults on the Charlie Brown Christmas Special – wah, wah, wah, wah. I tried to get with the program and be involved but it never went the way I envisioned it. We might be studying the alphabet and I would get a case of the “Spring Butts” – Miss Hockett, Miss Hockett, I have a question!” “Yes, Stevie?” “Miss Hockett, why is there air?” She would send notes home to my mother saying things like “Little Stevie seems to be marching to his own drummer.” We could even have a fire drill and I wouldn’t notice as I was busy drawing little busses around the edge of my paper, complete with sparks and black exhaust.

It never really got any better – through elementary school, junior high, high school and three college degrees, I was distracted. The only time that I could concentrate was when I was drawing or playing music. Attention Deficit, although probably over-diagnosed, is a real thing and cases have been found as far back as the 1700’s. Of course, they had a different name for it back then. The teachers called it “Sit on Down, and Shut on Up!” Some doctors say that your child will grow out of it, and some children do. I just didn’t happen to be one of them. Now a seasoned septuagenarian, I am still afflicted with it. I am offering this little scenario as a classic example.

My wife asked me the other day to hang a painting she had completed. Being in a good mood and not wanting to get the evil eye stare, I said “okey dokey” and went down to my shop to get a hammer and nails. Found the hammer but no nails. I did however, see some tacks. I thought “these are long enough, I could use these tacks.” Which reminded me, I had forgotten to sign and mail our income tax forms. So I went up to my office, found the forms, signed and dated them and strode confidently out to the mailbox to mail them. That’s when I noticed that the little flag was loose. This needs fixing I said. So I came back to the garage to get the screwdriver. On the way I took a few minutes to pot the cuttings I had made of the ileagnus. Upon opening my toolbox I found that someone in our house (who, in the interest of marital harmony, shall remain nameless) had been messing with my tools. I was reorganizing the screwdrivers by standard and metric when the mailman came. I talked to the mailman for a while about the importance of having your tools in order and he heartily agreed. Reading the mail while walking back to the house I saw an ad for Ace Hardware and thought, “Great, I’ll just run over there and get the nails.” Got the nails and was riding back with them and thinking about nails and I saw that my own nails were dirty from the potting adventure and also needed trimming. As soon as I got home (after putting out the garbage and watering a few flowers, of course) I went into the bathroom to get the nail clippers. When I opened the drawer I saw with horror that the toothpaste tube had been squoze from the top. (probably the same person who messed with my tools). Might as well brush my teeth while I have the toothpaste out, I mused. And brushing my teeth reminded me that I needed to make a dental appointment so I went to use the phone and saw that there were some messages flashing on the answering machine. This was after putting up some dishes though. One of the messages was from Hobby Lobby letting me know that my custom framing order was ready to pick up. Hmmmm, picture frames. Oh yeah, I need to hang that picture for my wife, and so I did.

As many of you know, my son Kyle was killed January 31st by an impaired driver just a few minutes after we departed for home from a glorious 8 day father-son road trip to Key West and the Florida Keys. I was headed to Columbus and he was going back home to Austin, Texas, only 15 minutes or so behind me.

Six or more people rushed to Kyle’s aid after the collision (estimated to be in excess of 120mph) and stayed until the ambulance left. According to the Baldwin County District Attorney, it is very unusual to have that many people stop, make heroic efforts and stay till the end. I have thanked six on the phone and become FaceBook friends with five of them. Am looking forward to meeting Steve Hogue and Toni Jumonville in person some day soon. I got to meet two of these angels on a recent trip to Baldwin county – Nathan Smith, a talented actor, stunt-double, and man of many talents, and Harry Sudduth and his fiancé Debbie. When Harry got there everyone was shouting “we can’t get him out.” Harry crawled into the burning vehicle and cut Kyle free, just in time.

I talked with Harry and Debbie for over an hour and it was wonderful! When we got up from the table there were hugs all around. Harry grabbed my left hand, reached into his pocket and said “My daddy always said never be without a knife, and I want you to have this” and placed the knife in my hand. It was an overwhelming moment.

Kyle, an intrepid turtle rescuer, wildlife EMT, and roadway samurai was noted for doing emergency U-Turns to assist people he didn’t know. I like to think that Kyle’s energy summoned these angels and heroes. I am truly blessed to know these folks.