I have been blessed with many opportunities and rare and unusual experiences. One of my most memorable was getting to spend six months in South America courtesy of the U.S. Navy. My ship, the USS Damato (DD-871), was selected out of approximately 1,000 ships in active service at the time (1968) to join two other surface combatants, a submarine and an aircraft group to participate in UNITAS IX, a massive hemispheric defense exercise working with the navies of North, Central, and South America.  UNITAS LX (60) occurred in 2019. The US surface ships were the USS Josephus Daniels (DLG-27), a Belknap-class guided-missile cruiser; and the USS McCloy (FF-1038), a Bronstein-class frigate. The name of the sub has evaporated from my memory. The exercise began on the first of June in Puerto Rico and concluded in late November. Then to Panama, Colombia, Venezuela, Brazil, Uruguay, Argentina, through the Straits of Magellan and up the Chilean inland waterway, Peru, Ecuador, the Galapagos Islands and back through the Panama Canal.

It was indeed a fairy-tale cruise reminiscent of Theodore Roosevelt’s “Great White Fleet,” a show of force displayed on a world voyage between 1907 and 1909. Peru dropped out shortly before our arrival due to some political uprising. We were only about a day out of Callao, the seaport for Lima when the task force got the order to divert. My dream of visiting the ancient city of Machu Picchu went up in smoke. We proceeded to our next port, Guayaquil, Ecuador, about one hundred miles up the Guayas River. The Ecuadoran government insisted that we visit their Galapagos Islands 600 miles to the west – the location for Charles Darwin’s famous studies on evolution.

We used to joke that we had to wear dress whites (nicknamed “choker whites” by the crew) to take out the garbage, but it was not far from the truth. There were many fancy balls, embassy parties, proclamations, concerts, and even parades. In Santos Brazil, we were the first US ship to visit the port of 600,000 people since 1939 and a massive parade was held for us. Sailors were treated as visiting royalty – the whole city went crazy! It reminded me of the ticker-tape parades in New York City at the end of WWII.

Everything was “high protocol!” In Chile, I was assigned to escort the US Ambassador to Chile’s daughter to a grand ball. In each country, there were meetings with dignitaries and many formal celebrations and ceremonies of grandeur. Another interesting side note is that when we were in Valparaiso, Chile, a small welcoming party came aboard the ship to meet with the Captain and officers of the wardroom. I remember being impressed with one of them, a young dark-eyed beauty named Isabel. Her last name was Allende. Only recently did I make the connection that this young woman became the now-famous author.

With the Argentine and Chilean navies, we worked with some large cruisers that were former US ships. In 1951 the United States transferred two ships to each of these nations. To Chile went the USS Nashville (CL-43) which became the Capitan Pratt (CL-03), named after Arturo Prat and the USS Brooklyn (CL-40), renamed the O’Higgins (CL-02) after Bernardo O’Higgins, a Chilean leader. To Argentina went the USS Boise (CL-47) which became the ARA Nueve de Julio (9th of July) and the former USS Phoenix (CL-46) became the ARA (Armada de la Republica Argentina) General Belgrano.

The officers of Damato made many friends with officers of other nations and some of these friendships have lasted to this day. The ships of other navies were allowed to have alcohol on board, but the U.S. and the Soviet Union were the only navies in the world that did not. Only when my seamen in the deck division became wet and frozen while refueling in harsh weather were miniature bottles of brandy broken out to ward off the chill. Therefore, these Latin officers were very popular with us guys from the “Teetotaling ships.” Not only did the other ships have liquor, but some of them were also known for rowdy parties. During a port visit to Buenos Aires, I was invited to one of them. It was like a surreal movie scene – loud thumping disco music, the suggestive glow of soft red lights, free-flowing booze, Go go girls and very friendly Latin beauties, and an abundance of buxom bosoms. I was quite impressed with the whole affair but fortunately, I gathered my wits and departed before I became a key figure in some tawdry international incident! 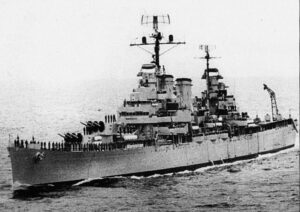 Fast forward fourteen years to a sad conflict – a 10-week undeclared war in 1982 between the United Kingdom and Argentina involving British dependent territories in the South Atlantic: the Falkland Islands and its territorial dependencies, South Georgia and the South Sandwich Islands. The area had long been a dispute between Argentina and the UK with each claiming sovereignty. They were the Malvinas to the Argentines and the Falklands to the British. On April 2nd, Argentina invaded and occupied the Falklands and later the other two islands.

Admiral Juan Lombardo of the Argentine navy ordered all Argentine naval units to seek out an approaching British task force and launch a massive attack on it. On April 30th, the General Belgrano was ordered to the southeast. Although it was outside the 200-mile exclusion zone, the British Navy considered it a threat and on May 2nd, the navy ship Conqueror fired torpedos at the Belgrano. One of the torpedos blew off the ship’s bow. A second torpedo struck about three-quarters of the way along the ship, just outside the rear limit of the side armor plating. The torpedo punched through the side of the ship before exploding in the aft machine room. After the explosion, the ship rapidly filled with smoke. The ship began to list to port and to sink towards the bow. Twenty minutes after the attack, the captain ordered the crew to abandon ship. Inflatable life rafts were deployed, and the evacuation began without panic. However, in the gloom of the bad weather distress signals were not seen, delaying any rescue attempts. Argentine and Chilean ships rescued 772 men but 323 were killed. 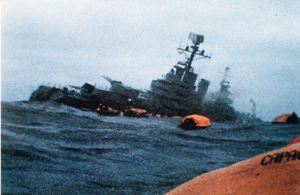 The ARA General Belgrano, my Argentine party ship – gave a last dying gasp and sank to the depths of the South Atlantic!