During my life, I have had many interesting experiences, including once seeing a ghost in a house in Key West. Others, while not so disturbing, were none-the-less disconcerting. They both involve Navy ships – one of ours (U.S. Navy) and one of Argentina’s. Here is the first story: 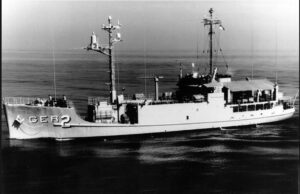 During the Viet Nam War, my destroyer, the USS Damato (DD-871) was in the naval shipyard in Yokosuka, Japan in 1967. It was in late December and my first time away from home at Christmas – 6,878 miles from home to be exact. However, my responsibilities and work-load did not allow time  to feel sorry for myself. We were in the shipyard for repairs for battle damage suffered in combat off the coast of North Viet Nam, near the DMZ at the 17th parallel. Since I was the deck officer I responsible for completing many work orders in a short period of time before we again sailed into harm’s way. To complete one of them I needed a signature from a ship’s “sup,” or officially, a ship’s superintendent. All over the base I traipsed looking for him and finally was told: “Oh, he’s over on the Pueblo!”

I found the Pueblo, requested permission to come aboard and finally found the guy to get the needed signature. I knew vaguely that it was a spy ship, but it was anything but “Secret Agent-looking.” In fact, it was a rather dumpy and dowdy old tub originally built as a coastal supply ship for the Army.

The Pueblo was launched at the Kewaunee Shipbuilding and Engineering Company in Kewaunee, Wisconsin in April of 1944 as a Freight and Passenger craft (FP) and was designated the FP-344, and later reclassified as a Freight and Supply vessel (FS). It served as a Coast Guard-manned Army vessel used for training civilians for the Army and for coastal supply.

In 1964 the Department of Defense became interested in having smaller and less expensive ships to use in gathering SIGINT (signal intelligence). In other words, a spy ship to capture and collect transmissions from countries considered hostile to our interests. We had some vessels designated AGTR and T-AG but the old Army ships were more flexible and responsive. The mothballed light cargo ships were just the ticket and the first one was converted and became the USS Banner (FS-344) in 1964. She was transferred to the U.S. Navy in April 1966 and was renamed Pueblo (AKL-44) after Pueblo County Colorado. From its inception, the Navy has used a ship naming convention that I have always liked. Each ship type carried a different category. For instance, battleships were named after states, aircraft carriers after naval battles, oilers after rivers, etc. LSTs (landing ship tank) and these light cargo ships were named for counties.

Pueblo was outfitted under a non-secret cover as a “light cargo ship” and manned by general crew (boatswain’s mates, engineers, radiomen, etc.). After shake-down training in San Diego, she left for Yokosuka in late September 1967.

There was no reason for me to think much of my few minutes aboard the Pueblo and it passed into the deep recesses of my mind. On 5 January, about a week after my visit, the ship sailed in transit to the naval base in Sasebo. She left there on 11 January 1968 headed northward into the Sea of Japan. Her orders were to intercept and conduct surveillance of Soviet Naval activity in the Tsushima Strait and arrived at the 42nd parallel to start its patrol. The ship was harassed several times by North Korean vessels. January 23rd was a fateful day! The ship was attacked by various means. They only weaponry aboard was a 55 caliber machine gun – no match for the Koreans. It tried to sail away from danger but was slow and became  captured. One sailor was killed, many injured and the remaining crew was captured, imprisoned and tortured. After much diplomatic maneuvering, the crew was finally released about 11 months after their capture. 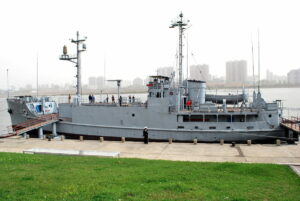 The Pueblo is considered by North Korea to be a war prize, towed to Pyongyang and to this day serves as a museum ship even though it is listed as a US Navy commissioned ship, along with the USS Constitution. My recently deceased friend Dr. Tom Dolan, a Columbus State University professor, and naval intelligence officer made a state-sanctioned visit to Pyongyang a few years ago  and sent me a postcard of the ship. After all these years, I still have an eerie feeling knowing that I stood on the deck of the Pueblo not long before its ill-fated voyage.