EPISODE # 7 – AT THE HARDWARE STORE

Papa took us to a hardware store this afternoon. We had never been before so we thought it was maybe a store with iron clothes because it would be hard to wear iron clothes. But we found out that it is a special store that sells tools, and paint, and yard tools, and leather, and ropes and chains and all kinds of other strange and cool stuff.

Two very nice people helped us – Jeffrey* and Joanne. Joanne said that Jeffrey works real hard but sometimes she has to “bing him in the noggin” to make him act right. We think we’d act right too if someone was going to “bing” us in the noggin. 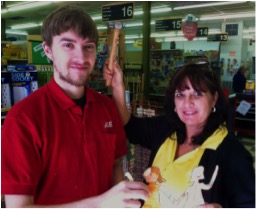 They took us around the store and showed us all the tools. There were too many to mention! They had saws for cutting wood, screwdrivers and screws and nails and hammers for putting stuff together and crowbars for tearing things apart. They had wrenches and pliers and drills and planes and everything! We never saw so much stuff and Papa got kind of “glassy-eyed” looking but he seemed happy. He likes hardware stores and likes to look for gee-gaws and gadgets that he doesn’t have. According to Papa it doesn’t matter if you need it or not – if you don’t have one, you must get one. It is a “man thing” he says. It’s like when ladies go shopping for clothes and they don’t know what they want but they have an overpowering need to look for it for hours (whether they buy it or not). The only real difference Papa says is that a vast subterranean network of tunnels connects all the ladies’ stores. That is why a lady can go into a Gap outlet and pop up in a Chico’s three miles away. We learned a lot about hardware stores (and grown-ups too).

*not their real names