EPISODE # 5 – VISIT WITH THE ORGANIST

We went with Mrs. Papa (Aunt Adleyn) to church this morning. She pumps the big pipe organ at St. Luke Methodist Church in Columbus. It was a really big gadget with keys and knobs and buttons and tabs and pedals and all kinds of whirly-gigs attached. It could play loud or soft. There must have been some little Mexican men in there too cause she said the organ had three Manuals. She said one was great, one was swell and the other was in the choir.

We weren’t supposed to be in the hidey-hole where she was, but she let us play on the organ and showed us all about it. We didn’t weigh enough to mash down the keys or pedals but it was very exciting.

She said the organ had some teeny-tiny pipes and some great big ones that could shake the building. She likes to wake everybody up when she plays the big ones. There were some diapersons, some bourbons, some bombdarbombs and a night owl horn. There were also some flues but we didn’t touch those ‘cause we didn’t want to get sick. Miss Adleyn says the whole thing works on lots of air and there is a big box like an accordion. It’s called a gusset and keeps the air going through. One time when she played in Opelika, her gusset blowed out! (She’s better now though) 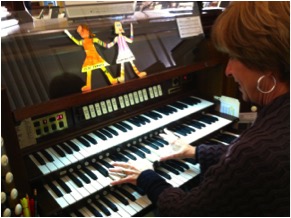