I wrote this a week or so ago for a writer’s challenge – sort of writer’s “Improv!”  The elements (prompts) were: an irascible person, a lost dog, papier-mache, and the Oort Cloud. 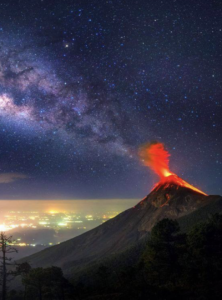 I don’t remember when I first saw her — a Cold Day in Hell perhaps. Sybil was one of the oddest people I have ever met. If required to describe her, I’d have to say Fire and Ice. When I asked where she came from, she would simply reply “some distance.” I nicknamed her Oorty, after the Oort Cloud, an extended shell of icy objects in the outermost reaches of the solar system, named after a Dutch astronomer who made significant contributions to the understanding of the Milky Way and a pioneer in the field of radio astronomy. Of course, Sybil, not being possessed of any modicum of humor abhorred this honorific. She was a strange one for sure and not given to small talk or sweetness. In fact, she had all the personality of a Moray Eel. I don’t know why she selected me to accommodate her amorous adventures as I am not particularly studly. In the balance of positive and negative aspects of the relationship, the balance was tipped slightly in favor of enduring this peculiar partnership. One might ask, “Why spend any time with her if she was that irascible?” The candid answer would be physical comfort. Actually volcanic intimacy would be a more apt description. Fortunately for me, we rarely spent much time together aside from when she came into the predictably next cycle of voracious need for attention. Symptoms were rarely mild but often varied. At times affectionate (completely out of character) and clingy and other times intense. I am not embarrassed to say that her wolf-like behavior during these times could be lascivious and quite scary and our encounters were not unlike rodeo events. Once her passions were satisfied she would mostly disappear, although we occasionally had coffee when she felt the need to criticize me and the rest of the world. I would think to myself “I’ve got to end this,” but in weakness I would always relent when she appeared. She was a bad habit but an oh so delicious one.

Over time, her mood became less hot-tempered and irritable and more morose. She seemed to be troubled and emanated a sense of doom. One day she called and asked me to meet her at Cambridge Park. We were sitting on a wrought iron bench and I noticed that although not cheerful, she seemed more relaxed. She then announced that she had secured two plane tickets for Mexico. When I asked who they were for she said “why us, silly!” The words us and silly had never crossed her lips before and it was quite an odd feeling to hear this. When I protested that I could not afford it, she replied that everything had been taken care of.

Several weeks later, we were on a Delta flight to Mexico City. Having never been to Mexico before, I was full of anticipation and eager to explore the exotic atmosphere of this richly historical region. However, when we touched down she said that we did not have time to sightsee and that I could do this later. “We must quickly go to Popocatepetl!” Having never heard this word I pressed for more information. “Popocatepetl is beckoning.” I was very irritated at having my dreams of embracing the sights and sounds of the city quashed and this brought visions of smacking the stuffings out of a Sybil-shaped papier-mache pinata.

After a very dusty and bumpy ride on an old converted school bus we arrived at the base of a very imposing, and recently active volcano. We secured a small hut for the evening and intended to rest for what she said would be a trying trek in the morning. However, no rest was to be had because once the kerosene lamp was extinguished, she charged me like a raging bull. Our amorous adventures that night could not be called lovemaking. In fact, it seemed she was trying to destroy me, although I managed to live through it most pleasurably.

Exhausted the next day we began our ascent to the lip of the crater. It took the entire day and when we reached the top, the sun was just setting. I said with a faint tremor in my voice “I don’t think El Popo likes us here.” The heat was intense, the ground trembled and the scent of burnt matches permeated the atmosphere. Grabbing my arm she pulled me closer to the edge. Sparks were cascading in the updraft and I became terrified! Suddenly she stood teetering on a sandy ledge and shouted “Push me in! Do it!” I thought she was delirious and attempted to pull her back. “Do it you cowardly human scum!” In an instant of temporary insanity I let her vitriol overcome me and I gave her a hard shove. Wild-eyed she stumbled back, slipped and went over the edge and down into the fiery caldron. Her ear-piercing shrieks haunt me to this day. Then a strange peace came about and the earth quit trembling. I fancied that I could hear an eerie sound — not quite a moan but more of an “ahhhhhhh.”

I stood there for what seemed like ages then slowly made my way down the mountain, arriving at the little hut at dawn. I slept for twenty-four hours but the next day I had an odd peace about me and spent several days enjoying my free vacation, oddly not bothered by the preceding events.

Although this bizarre adventure would be indelibly etched into my psyche, I got on with daily life and was content to be free of her. But one blustery night there was a persistent scratching at the door. Opening it I peered out into the wet darkness to see no one. Then I looked down on a wet and shivering old mongrel, emaciated, bedraggled and forlorn. She pierced me with a baleful look then slinked into the house and hid under a table in the den. From this point she never moved except to eat and leave for brief calls of nature. I wasn’t going to name her, but since she has become a permanent resident, I have decided to call her Sybil.