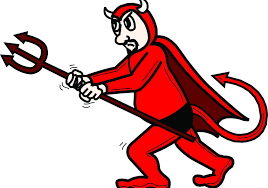 As a single ( usually broke) parent, I always liked to have a planned week-end for my children aged 6 and 9, so I was delighted when we were invited to a youth “Fun Night” at a local church. Well, a fun night certainly sounded like fun to me. Now I look back and marvel at my naïveté.’ I can’t remember the name of the denomination. To protect the guilty, I’ll just call them the World-wide Church of What’s Happenin’ Now.” The church was housed in a Butler building with some Dryvit outer coating and some tacky stuff stuck on the front to appear churchier.

It was wintertime and already dark by time we arrived and we were greeted enthusiastically at the door by a somewhat over-excited bunch of Juvenile Rangers. There was loud blaring music. The organist obviously felt that more is better and she had all stops on the electronic organ pulled so all the voices – trumpet, oboe, flute, etc. were in raucous competition. This cacophony was aided by a Leslie, a giant whirling speaker that was set to maximum vibrato. We had barely been seated when the first bizarre part of Fun Night took place – a misguided fund-raising scheme that involved the kids racing about the room pulling dollar bills from the front of people belts. The noise created in this event was deafening! The theme of boys against the girls added to the hilarious hubbub.

Operating the sound and lights were several men in a balcony over the front entrance. One of them became so carried away with the excitement that he stomped his foot so hard his left leg plunged through the floor and was dangling through the ceiling. A quite large fellow, he became panicked in trying to free himself and started squealing like a pig. Stephen and Sarah thought this was all part of the fun and shouted with glee, but the more the guy tried to extricate himself the worse became his plight. The bill grabbing had to be temporarily halted to allow some stronger men to pull him out of the hole he had made in the entrance overhead. Success was finally achieved and things returned to normal.

The lights were then dimmed and the congregation encouraged to come forward and pledge their commitment to the church. To aid in this effort, little Children of the Corn went out into the aisles and pulled people up front to the altar. There began wailing and moaning, head smacking, fainting, and crashing to the floor in the name of the Lord. I thought it quite scary but it didn’t seem to bother my kids. Sarah asked what was happening and I could only explain to a six-year old that they wanted us to become “What Nowers.” She said, “Well then, we better run a background check.” Unfortunately, several of the elders heard this remark and castigated me with withering glances.

Next up was some kind of camp meeting puppet show with giant bears dancing around. At this point I was having flashbacks to hippie experiments involving mushrooms. Nothing seemed real. This happy boogie bear ballet was following by another cash-copping contest, this time with the youth versus the adults. I personally think it was rigged. The youths were proclaimed the losers and the prize for the adults was the witness of the youth director being baptized by a huge bucket of heavenly green slime poured from somewhere in the heavenly rafters. The fervor accompanying this was unnerving and I half expected someone to shout out – “stone him!”

My paternal protective instincts began to kick in and I was looking for the exits. We hadn’t even gotten to the promised potluck supper yet but I had hidden a few dollar bills from the Junior Nazis to pay for supper at McDonald’s if necessary.

Next up was a Cataclysmic Shoot Out at the Catechism Corral. Enter a seven foot walking puppet with a gigantic papier-mâché’ head. A cowpoke kind of figure reminiscent of Woody in Toy Story. The radiance of his innocence gave me an ominous feeling of dread. Considering the style of the previous parts of the youth fun night, I sensed that something wicked this way would come. No sooner than this thought faded than the antagonist appeared – a Faustian Fiend created from some malevolent mâché.’ This diabolical puppet sported a huge red devil-head and approached the “Woody” puppet stealthfully from behind. The ensuing shrieking was deafening. The good guy was goofily oblivious to his impending doom, even with the exhortations of warning from the crowd. At this point things took a sinister turn and someone shouted “KILL HIM!” The chorus was taken up and became terrifying. “Kill him, kill him, kill him,” they chanted with increasing voracity and incitement to riot. My little Sarah, never shy to throw down the gauntlet, rushed in to save the day and kicked old Beelzebub right smack in the shins! This came as quite a shock to the Devil and he started hopping around on one foot and let out a diabolical diatribe of language certainly not fitting for the sanctity of the Tabernacle. Some old bag with a ‘high and tight” hairdo ran after Sarah, grabbed her arms and started shaking her. Sarah didn’t understand that her action was unpopular. She thought, given the mood, that she was no less a hero than a junior Joan of Arc. I raced over and told the woman to unhand my daughter and was surrounded by burly ushers and we were summarily ushered out. The whole crowd followed us into the parking lot to a chorus of boos and some decidedly un-Christian threats. We jumped into my little Japanese beer can pick-up and sped away into the safety of the night, laughing all the way.