When Mike Venable asked me to create this blog, he said I could write about anything I wanted to. So far, it has been stories but I just thought “Why not throw in a poem or two along the way?” Now, I must qualify that by saying my poetic offerings are more in the realm of “Pomes” and that poetic license also reflects that most of mine are not too serious but more whimsical. I suffer/benefit from a family condition which I call “Rhyming Couplet Syndrome,” which means that I simply can’t stop rhyming. Most of the topics are merely my personal observations of the craziness we see in our world every day. By the way… I am the POME GNOME, so if you know anyone whose life story should be put to verse, please refer to shameless commercial message at the end of this offering. The name has been changed to protect the guilty.

AUNT BETTY’S WRECK, or the dangers of distracted driving.

To tend to sundry actions

And vowed that she’d not be deterred,

So she placed her iPhone on the seat,

Where it innocently sat,

And every once in awhile,

She gave it a gentle “pat.”

Quite proud she was of the discipline,

She so nobly displayed.

But soon enough, her confidence,

Was to find itself mislaid.

It was soft at first, and gentle,

But her iPhone “tapping” finger,

Began to frolic in her head.

And finger tips to keyboard,

But this simple attention lapse,

Would cause a major splatter.

Something jumped out and hit her,

And she said some really funny words,

She swore it wasn’t there before,

It must have kinda “sprouted.”

And we all know that Aunt Betty’s

There was noise and dust and chaos,

And bricks and lots of rocks.

And when the smoke had finally cleared.

Well, there you have it. Here is the commercial: 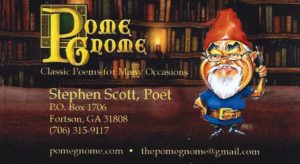